The bees thank you Mr. Lincoln 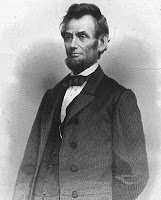 Few people in history have changed the course of the world more than Abraham Lincoln. Besides holding the union of the states together and ending slavery, one other lesser known decision proved to be just as monumental. It was way back in 1862 that Lincoln decided that the country needed a United States Department of Agriculture (USDA) to help the farmers of the nation use the latest knowledge and technology to produce the food necessary for a growing country. After saying that farmers were neither better nor worse than other people, Lincoln continued: "But farmers, being the most numerous class, it follows that their interest is the largest interest. It also follows that that interest is most worthy of all to be cherished and cultivated -- that if there be inevitable conflict between that interest and any other, that other should yield." The world has certainly changed since then. Today less than 2% of the U.S. population is involved in agriculture, but the mission of the USDA remains the same. In fact, the USDA has been perhaps the most successful institution in the world for diffusing scientific knowledge and practices to the people that can put them to use. The USDA has been a prime reason that so few can feed so many. 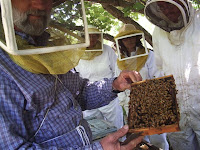 Honeybees have not been left behind in what Mr. Lincoln called the "people's department". The USDA Bee Breeding Lab in Baton Rouge, Louisiana is a good example of scientists putting the results of their research into the hands of beekeepers who desperately need help to keep their bees healthy. Two successful programs have been the importation of Russian bees and the development of Varroa Sensitive Hygiene (VSH) bees. Both of these lines of bees have been proven to be effective against the worst of the honeybee pests, Varroa mites. If Abe came back today I think he would be proud.

Read more about the USDA Bee Breeding Lab in Baton Rouge and the dedicated scientist who work there.
Posted by Tom and Suki at 6:09 PM