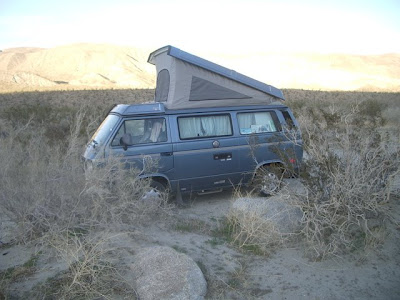 We recently went out to one of our favorite camping spots, Coyote Canyon in the Anza-Borrego desert. This is a unique spot because it is one of the few places in this vast desert that has a year round water source, Coyote Creek, which is actually the longest creek in San Diego county. 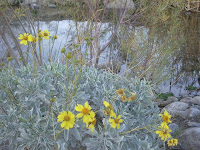 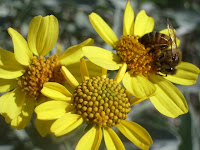 Because of the reliable source of water and the abundant spring wildflowers, it also supports a good number of feral honeybee colonies, now mostly Africanized. Finding a wild colony in this sort of landscape though is a bit like finding a needle in a haystack. But using some knowledge of bee behavior, a little logic and a keen eye and ear, it's possible to let the bees tell you exactly where their hive is located. 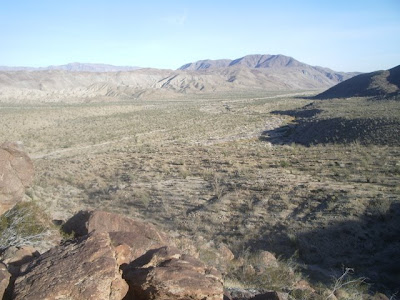 Here is a picture of a feral colony we first located back in 1997. We return every winter to check on it, and it has been occupied every year. In the summer the hot sun shines into the rock crevice and melts a good part of the hive away, the floor is covered with melted wax. We'll return in a couple months to see the desert carpeted in wildflowers. At that time we'll put up a little thatched sun shade to help them through the summer heat. 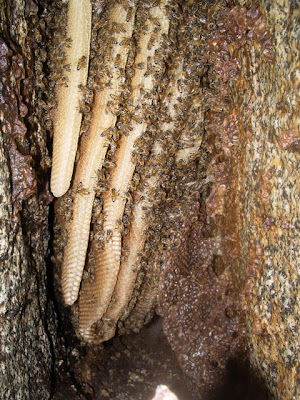 Many years ago I spent a week on Santa Cruz Island off the central California coast, learning how to hunt wild honeybees from a real expert. Dr. Adrian Wenner, Professor Emeritus at the University of California at Santa Barbara, was working with the Nature Conservancy to bring the island back to a more natural state by trying to eliminate non-native species. One real problem were the European honeybees pollinating imported European plants such as fennel, which was taking over the island. In the 1870's a few hives were taken to the island where they prospered, swarmed, and soon filled every niche on the island. Dr. Wenner's plan was to locate all the colonies so that he and his team of graduate students could systematically eliminate them. As a bee breeder I was interested in obtaining some of these survivors as breeding stock before they were eliminated, that's how I ended up spending a fascinating week learning the long lost art of bee hunting.

Dr. Wenner is perhaps best known for his challenge to the validity of Karl von Frisch's theory of honeybee dance language, for which von Frisch was awarded a Nobel Prize in 1973. Dr. Wenner's contention that odor cues alone were enough to explain the remarkable nectar finding skills of honeybee colonies sparked a heated controversy which continues to this day nearly four decades later. Dr. Wenner used his own theory to develop a technique of bee hunting to locate more than 160 colonies on Santa Cruz Island over the years. But as hard as they tried to eliminate the colonies, they never could keep ahead of the reproducing colonies. In the end they decided to introduce Varroa mites which wiped out the island bees in a few years. Although the last time I talked to Adrian he thought there was perhaps one colony still hanging on. As a beekeeper I'm rooting for their comeback,this time as mite resistant bees. The island has now become a part of the Channel Islands National Park.

View Larger Map
Explore the island by zooming in with the plus button on the map controls, or just double click where you'd like to see. Zoom way out with the minus button to see our favorite camping spot in Coyote Canyon.
Posted by Tom and Suki at 12:00 PM