Our beekeeping trip to Vietnam

Suki and I took a fascinating trip to Vietnam last October as part of a beekeeping development project funded by the Canadian government. Headed by professor Gard Otis of Guelph University in Ontario, this was the last year of a seven year effort. One goal of the project was to help pull 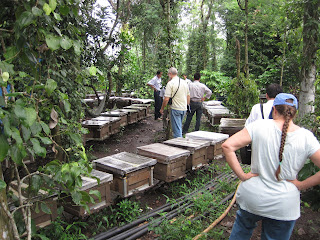 households out of poverty by teaching them how keep a few hives of bees, mostly the Asian honeybee Apis cerana. The average per capita income in Vietnam is around $1,000. Extra income from the bees can make a huge difference in the standard of living of a rural family. Vietnam is a very favorable environment for bees, so the potential for helping the poor is enormous. The native Apis cerana bees are 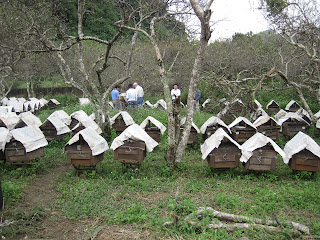 wonderfully adapted to this environment. Being the natural host of Varroa mites, they are naturally resistant to them. The mites only invade drone brood, so little damage is done to the colony, and mite populations are kept in check.

Beekeeping in Vietnam is divided between the small beekeepers keeping a few hives of Apis cerana, and commercial beekeepers who keep large numbers of imported European honeybees, Apis mellifera. European bees are more productive than the native Apis cerana but require much more care and the necessity to move the bees to better forage several times a year, just as in the United States. The commercial beekeepers in Vietnam are highly skilled. Most of these beekeepers know how to raise their own queens.

Our role in this project was to participate in three workshops on bee breeding, held in 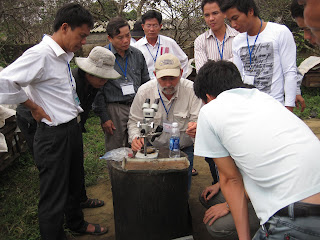 various parts of the country. We focused on sharing how to select bees for hygienic behavior, brood viability, and temperament. Gentle temperament was the norm for the European bees in Vietnam, no aggressive bees were ever seen while we were there. 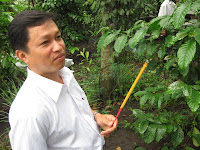 to inspect the bees, a stick of incense worked just fine. It lights in seconds and smells so much better than a smoker.
Posted by Tom and Suki at 4:57 PM