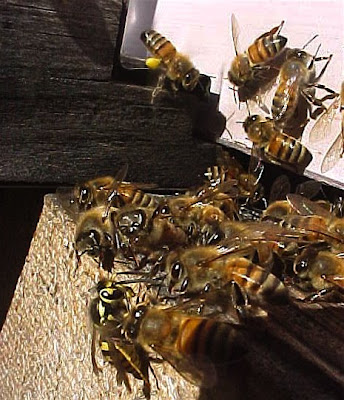 The biggest threat to our bees here this year were yellow jackets, which become a problem in the summer and autumn. They probe each hive looking for the one which is least capable of defending itself. Once they find the weakest hive they recruit their nest mates to join in on the attack, robbing the honey and pollen stores as well as the brood and adult bees. When they clean out one hive, they go on to the next weakest hive, eventually they can wipe out an entire apiary.
Usually wasp colonies perish in the winter cold and wetness, their nests being in the ground. Late in the season they raise new queens which will find a protected spot to winter. In spring, the queens will each begin a new nest by themselves. As her offspring workers hatch to help her, the colony grows over the summer to contain huge numbers which can overwhelm a beehive. In dry years, such as we've had here lately, many wasp colonies don't die over the winter. These perennial colonies have a head start in spring and develop even more massive and destructive numbers.
In the apiary, we have to trap yellow jackets to keep them under control. A simple trap we use is a long neck beer bottle (Corona works well), which is filled halfway with sugar syrup. The wasps are lured in, where they drown. These can be fed to our chickens, to be turned into eggs. This system is pretty effective at protecting the bees without using toxic chemicals. 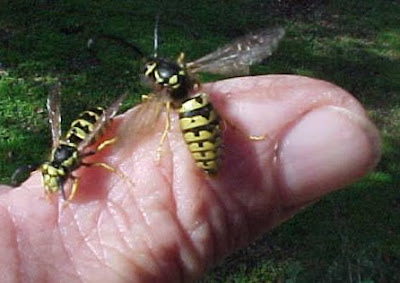 A yellow jacket worker and queen 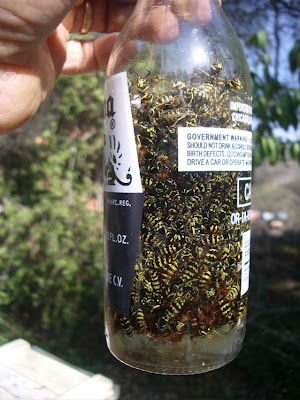 Yellow jacket trap with 1:1 sugar syrup
Posted by Tom and Suki at 12:58 PM